So nice I had to go twice…and will probably go again.

Like several of the mental facilities I have visited, Kings Park Psychiatric Center is a gigantic sprawling campus (521 acres!). I barely scratched the surface on my first visit, and maybe am now half-way through seeing everything after my second. Once the snow thaws, I’ll most likely be back for my third.

KPPC (or “The Psych Center” as it’s known to locals), shares a similar story as so many other asylums-past. Kings County (otherwise known as Brooklyn) was in need of a facility where patients could be treated far away from the hectic city life. To fulfill this need, The Kings Park Lunatic Asylum was established in 1885 on Long Island to provide relief from overcrowding at the Brooklyn County Hospital. It initially consisted of a few wooden buildings where 55 residents could be rehabilitated. The goal was to steer away from the large overcrowded buildings that patients had normally been crammed into, and instead providing a tranquil and serene setting where they could live and work (we’ve heard this one before).

Patient living before the overcrowding began.

As need for mental facilities grew, the city could not keep up and were faced with exactly what they were trying to avoid – overcrowding. The  asylum in turn was handed over to New York State in 1895. After a couple of name changes, the institution was re-named Kings Park State Hospital in 1916, and as the hospital expanded to the giant campus it is today, it created the town of Kings Park, where it currently stands. 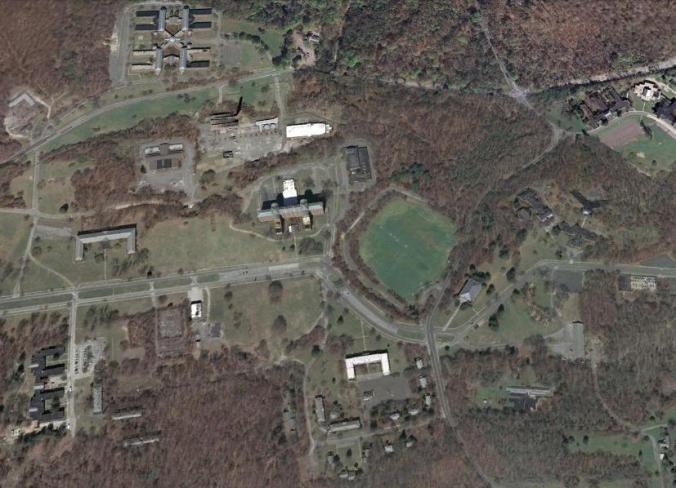 An aerial view of the KPPC campus today.

After this transition, the state built the hospital into a self-sufficient community that not only grew its own food, but also generated its own heat and electricity, raised livestock, had its own Long Island Railroad spur, and housed all of its staff on-site.

However, as we know, these positive goals set by state asylums never last. Patient populations grew very quickly, and the hospital continually tried to expand. By the late 1930s, the state began to build upward,  resulting in the infamous Building 93, a 13 story high rise that stands as the center-piece of the campus (the very sort of structure they were trying to avoid). It was used as an infirmary for the facility’s geriatric patients, as well as for patients with chronic physical ailments. 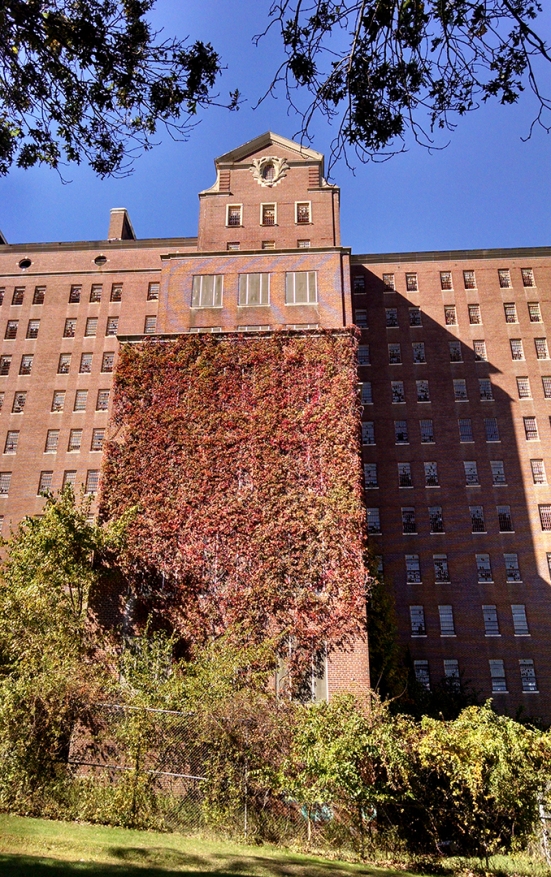 By 1954, the population at Kings Park was over 9,303 spread over 150 buildings and separated by age, gender, temperament, and physical limitations. By the time Kings Park reached its peak patient population, the old “rest and relaxation” philosophy surrounding farming had been succeeded by more invasive techniques like pre-frontal lobotomies and electro-shock therapy (which KPPC touts the badge of being one of the first facilities to utilize such techniques). These procedures, while viewed as groundbreaking at the time, were given to patients often without their consent, and in some cases, used as punitive measures for unruly patients. As one can imagine, the infamy grew as the institutions reputation reflected horrifying procedures and dismal conditions due to overcrowding.

I thought I would spare you from the images I found of actual lobotomies – nightmare inducing.

However, Thorazine came to the rescue by the late 50s, and began to be prescribed to treat mental illness, allowing patients to live “normal” lives outside of the constructs of a mental institution.

The need for such a large facility began to decrease with this new outpatient treatment, and throughout the country, similar facilities were beginning to shutter. In addition, activists worked in legal suits through the 1970s to reduce the patient population in major institutions, arguing that people could better be supported in smaller community centers. By the early 1990s, the Kings Park Psychiatric Center, as it finally came to be known, was further reduced with many of the buildings shutting down, including the massive Building 93, which shuttered its floors from the top down. The entire facility finally closed in 1996, moving the last remaining patients to nearby community centers – which there also appeared to be a shortage of (C’mon guys. Get it together), resulting in  many more mentally ill people being caught up and retained in jails and prisons because of difficulties in dealing with the world. Many of the homeless in urban areas of NYC are mentally ill people with chronic illnesses who have trouble keeping up with medication regimes or resist them.

Like Letchworth Village, Kings Park currently stands as a public park, where you can find people walking their dogs and playing soccer games next door to these decaying (and some say haunted) structures. It’s easy to get lost on the sprawling campus, especially as you wander back off the paved road and lose track of where you are (and sometimes wind up facing what looks like someone else’s residential property – whoops).

On my first visit, we didn’t get to see much more than Building 93 and a few of the technical buildings that sat near by. We searched several of the floors of 93 hoping for something new on each floor, but after floor six, we realized that they were all mirrors of each other; the only thing changing was the amount of asbestos or the number of teenagers we ran into. JUST IN CASE, we did scale to the 13th floor (only after we left the building then decided to come back and scale the 13 floors all in one shot ), and the only thing different we discovered was the beautiful view (it is surprisingly scenic at Kings Park!) and that we might be a little out of shape. Most of Building 93 is cleared out save for some beds and cabinetry. By the looks of it, a lot of the smaller items were either looted or thrown into the surrounding courtyard by bored teenagers.

The technical buildings were equally as vacant, especially considering one of the buildings (Buidling 44 – what used to be the food storage warehouse), caught fire the week before. There were still puddles on the ground and the smell of fire still infiltrated the air.

The floors were still wet from the recent fire fight.

It wasn’t until our 2nd trip, when we started looking at the small cottages and the dormitories where we found more artifacts in the buildings: furniture, animal carcasses, hangers, telephones, curtains and a lone bottle of mustard.

This mustard couldn’t cut it, apparently.

In 2006, the New York State Office of Parks, Recreation and Historic Preservation received jurisdiction over 368 acres of KPPC property  to start remediating environmental hazards, which includes demolishing several of the decaying buildings.  Nineteen buildings have already been demolished, including the morgue (I always miss the morgue!). The KPPC Clean Up site has a lot of before and after photos that make my heart hurt seeing what buildings used to exist on these now barren fields. Some of the more stable buildings, like Building 93, are still receiving proposals of what to be done – one being to turn it into luxury apartments. Yikes.

Hopefully, I’ll be able to make it back before the yuppies start moving in.

Each floor of Building 93 looked the same – hallways leading to the east and west wing dormitories.

And “sun rooms” in the middle of the two wings.

93 actually had a beautiful view of the water – reason enough to build some luxury condos? 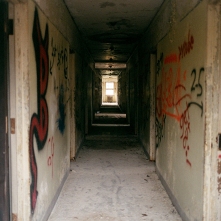 The staff family housing (all the single staffers had the pleasure of living in a group dorm). 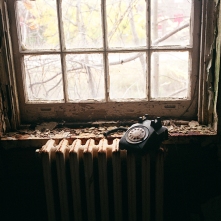 I’m pretty sure this was a part of the staff dormitories. 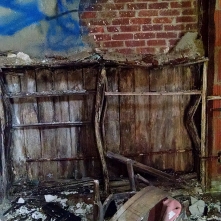 The aftermath of the aforementioned fire.

Laughter at the fire house rope ladder that we discovered at the building in the background (I did not have the upper body strength to scale it).