The first thing you notice as you enter the winding back roads to the Land of Oz theme park is the loss of cell phone service. This ceases to be a concern once you notice the second thing, which are patches of yellow brick road letting you know that you’re headed in the right direction. Tucked away in the ski resort town of Beech Mountain, NC, the area is dotted by rental homes and the aforementioned signature bricks. We made the trip during the off season, so these houses, as far as we could tell, were empty. It was also extremely foggy, with maybe ten feet of driving visibility. The mood was appropriately set when we rounded a corner and were greeted by this: 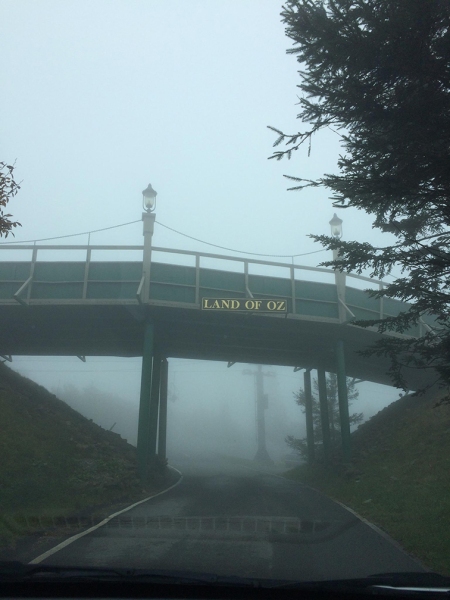 Welcome to Oz, only one town away from Silent Hill

Land of Oz was conceived by entrepreneur Grover Robbins (of Tweetsie Railroad fame) as a way to make the local ski town a year-round tourist destination. The park opened in 1970 with the help of investor Debbie Reynolds and her (then little-known) daughter Carrie Fisher, who bought several props and costumes from the 1939 Wizard of Oz film from MGM studios to display in the site’s small museum. Sadly, Robbins never saw his dream come to fruition, as he passed away from bone cancer 6 months before the park opened. 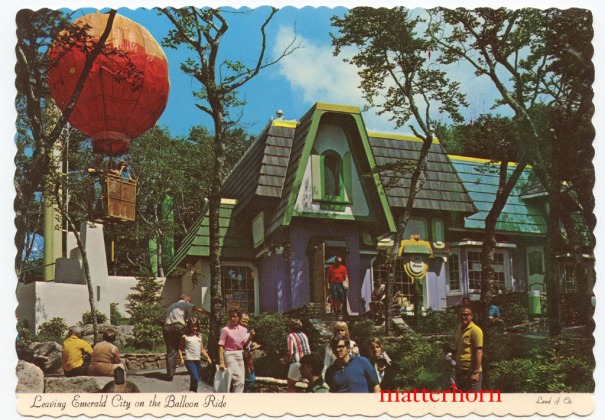 When the park first opened, it saw an average of 20,000 guests per day. Visitors were meant to walk in the magic shoes of Dorothy, experiencing the story first hand. Guests began their journey at a replica of Dorothy’s house, greeted by Auntie Em. After the “tornado” hits, they emerge on the other side of the house and into the wonderful World of Oz. Following the iconic yellow brick road, patrons picked up characters along the way, like Tin Man and Scare Crow, visited locations such as the Cowardly Lion’s Den and the Wicked Witch’s castle, and finally ending at Emerald City, where there was a stage show with all of the characters meeting the Wizard, and ski lifts meant to act as Dorothy’s balloon ride, giving guests a winged-monkey’s view of the entire park. 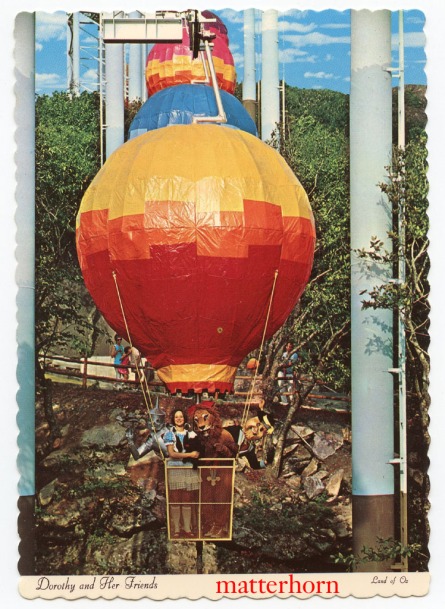 In 1975, as business slowed due to flagging real estate sales, someone set fire to the Emerald City, also burning some of the film artifacts, including the dress worn by Dorothy. Rumor has it that disgruntled employees set the blaze, and one can only hope they were dressed as flying monkeys at the time. After attempting to stay open for a few more years, the park fell into serious disrepair, and finally closed in 1980. Starting in 1991, however, it began opening sporadically for special occasions. Years later, former employees began “Autumn at Oz” to act as a reunion. Since then, it has become an annual tradition, drawing sizable crowds for two days every fall to watch former cast members reprise their roles and to get a glimpse at what is left of the park. 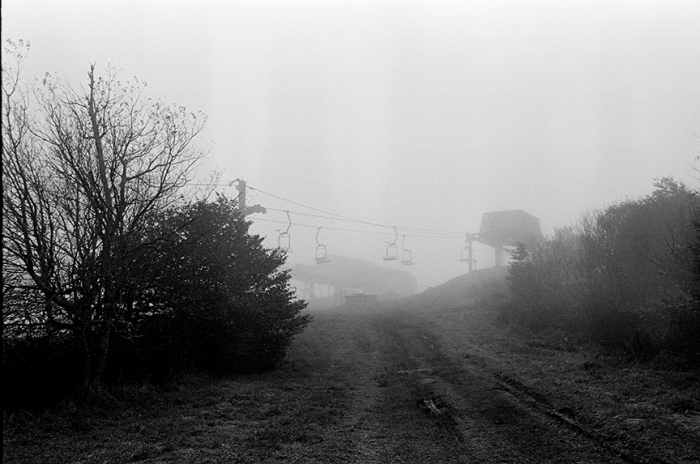 As we stepped out of the car, we could hear the faint sounds of laughter in the distance. As a general rule, laughter in a seemingly empty location is a bad thing, especially when you can’t pin-point which direction it came from. However, we drove a long way to get there, so we forged ahead. We soon learned that the decrepit ski lifts were actually running.

It turns out they were being used by a group of mountain bikers to hit some sweet-ass downhill runs. We tried to avoid them, but the second we felt like we were in the clear, a couple of them cruised by us on an off-road golf cart. We tried to act like we belonged there, but we reeked of being from out of town. Not to mention they were inevitably going to pass our rental car with out-of-state plates. Anyone local with half a brain could identify us as trespassing tourists. We decided not to worry about it and head toward a busted open chain link gate in the distance. The fog was still thick, and all we could make out behind the gate was the eerie silhouette of a horse. Then, just like the ‘Wizard of Oz’ film, the sky suddenly cleared up and revealed a ludicrous technicolor world full of wonder and existential horror. 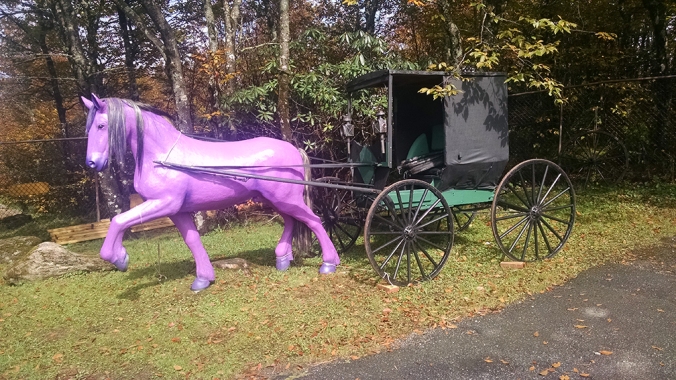 I swear, this looked scarier when it was hidden in the fog.

We found ourselves in front of a large house. The house and front yard, where a Tin Man sat ceaselessly staring, were well maintained. We realized later that this was Dorothy’s house, but at the time it was hard to tell if it was part of the park or used for some other purpose, since it was isolated by a fence. Not seeing any obvious way into the park, we moved on to find another entrance. Further down the street we found what appeared to be the end of the park, which took the form of the gates to Emerald City. 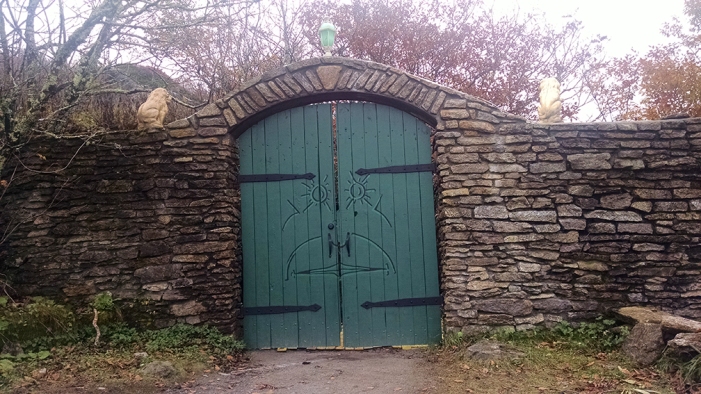 Look closely and you can see the yellow brick road poking through the bottom of the gate.

We looked behind us and found an empty foundation where Emerald City possibly stood. The gate itself was locked, but like Dorothy, we didn’t come all that way to be turned away at the gates. We didn’t, however, want to be turned away by the cops, so we spent some time fretting over the details of our situation. Are the rental houses all around us really empty? Are there people inside of them just watching and waiting for us to climb over the gates? Do all of those parked trucks belong to the mountain bikers, or some other group of people we had yet to encounter? Were there any security cameras we missed on the way in? Did those dudes on the golf cart steal our car? By this point, anyone watching us could tell what we were up to, so we said, “screw it,” and climbed over the gate. It was not smooth. The gate was built into steep hillsides covered in trees and mud. It didn’t take long to get over the wall, but we lost several style points in the process – but what we saw on the other side was worth it.

Our view from the other side of the gate.

Once we were inside the park, we were fairly obscured, and could take our time poking around. Very little remained of the park itself, but there was enough charm left inside to make it a unique experience. Several of the trees were still adorned with menacing faces. The Wicked Witch’s castle has also withstood the test of time, almost daring vandals to take their chances.

The Wicked Witch’s castle. No flying monkeys to be found, unfortunately.

It was hard to completely separate yourself from reality, since there was plenty of evidence that a big event happened there recently. Silly string cans, smoke machines and electrical cables could be found all over the place, and an abandoned park loses its edge a little when you know there were families running around it a few days earlier.

Following the yellow brick road back to the beginning revealed that nothing much else proved to be as resilient as the castle. Our walk ended at what appeared to be a wrecked version of Dorothy’s house, built at precarious angles to simulate a crash landing. After researching the area afterwards, it looks like this version of the house connected to the nice one we first saw. I’m assuming guests walked into the nice house, experienced a tornado in the “storm cellar”, and emerged from the wrecked house inside the park to start their journey down the yellow brick road. We couldn’t find a way into the house without breaking something, so we moved on. A short trip around the house led us to a little waist high latch-gate that opened up into the place where we started, in front of the nice version of Dorothy’s house. Needless to say, we felt kind of stupid realizing we missed this super easy entrance and chose instead to climb up a muddy hill in the potential watchful eyes of guests across the street (my travel companion deemed our way more bad ass, though).

Contrary to your favorite internet periodical, Land of Oz is technically not abandoned. While it is shuttered, and still considered trespassing to actually go inside, the park itself and the surrounding area are still very much in use. In fact, it turns out you can book private events here and even rent Dorothy’s house. Apparently, you can pay reasonable rates to do everything we did without fear of prosecution. Whoops.

The view peaking through the gate before we entered. Once I saw this I HAD to get in there.

This was outside of the park. Perhaps it was an entrance? But the mountain bikers were immediately to the left, so we passed. 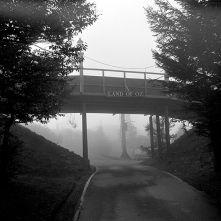 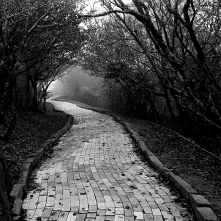 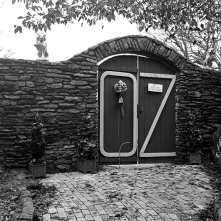 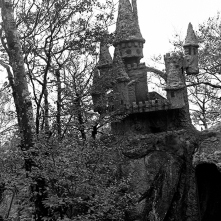 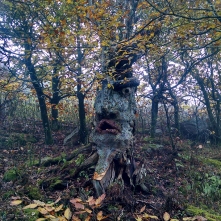 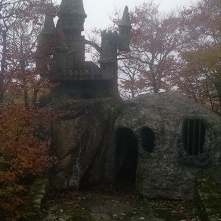 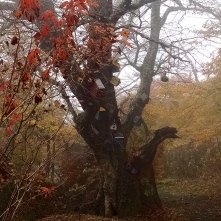 I am not privy enough to the Oz story to know why there was a tree full of birdhouses. 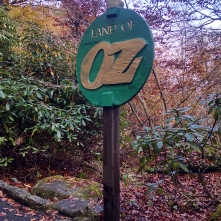 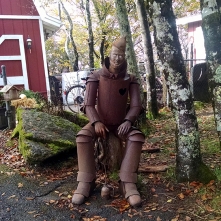 The ominious tin man guarding the front of Dorothy’s house. 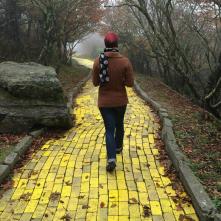 And of course I needed a walking-down-the-yellow-brick-road photo.
Advertisement

One thought on “Land of Oz”