Next stop on what accidentally turned into my abandoned school tour of the South: Alderson Academy.

Originally, plans included asylums and abandoned amusement parks, but as I’ve come to find out, time is never on my side. Asylums have been converted into cheesy haunted houses for the Halloween season, and amusement parks have been taken over by crazy gun-wielding fanatics. Here today, shot tomorrow. The safer bet? An abandoned Baptist academy whose only guardian are two adorable trailer park dogs, one who is now my best friend. And for once, this place isn’t even rumored to be haunted (I checked!).

The Alderson Academy opened on September 18, 1901 as a private school for young men and women in the town of Alderson (duh), West Virginia by Emma Alderson (who also served as Vice Principal for a number of years) and Reverend John C. Killian, then minister of the Greenbrier Baptist Church. In an era where there were no public high schools, the academy thrived for a short period; however, as public high schools became more popular, offering the same education for the low price of $0,  the academy began to struggle, and was handed over to the West Virginia Baptist General Association in 1911,  who renamed the school to the Alderson Baptist Academy. Despite the new management, the Association continued to struggle with admissions and keeping the school afloat financially. That is, until someone had the bright idea to offer two-year college level courses, turning the Academy into Alderson Junior College in 1918. After almost about 6 years of fundraising and construction, the four-story brick building that still (barely) stands today was finally completed in 1924. 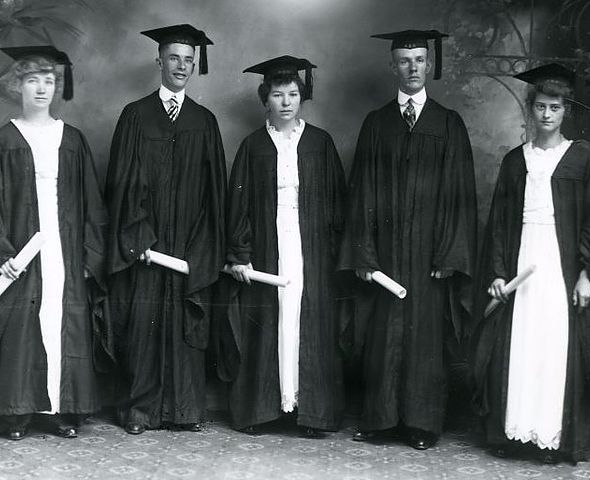 At this time, around 115 students made up the school’s population, only 12 being enrolled college students. The faculty rounded out to a mere 18.

By 1930, the college had turned into a senior college, with its peak enrollment at  412 students, however, financial difficulties still stirred, especially during the Great Depression. Finally, on October 15, 1931,  Alderson was forced to merge with Broaddus College, in the nearby town of Winchester on October 15, 1931, leaving behind the Alderson campus.

In the years after the merger, several schools attempted to operate out of the building, with not much success.  Armstrong College, founded by Dr. I.B. Bush of Charleston, operated from 1932 until 1935. Between that time and 1953, the building sat vacant while interested parties attempted and failed to find a use for the space. Finally, it was purchased for $40,000 by a group of independent Baptists who opened the Mountain State Baptist High School. But like their Baptist brothers and sisters before them, poor decisions were made while trying to keep the school afloat, all which inevitably contributed to the school’s failings. The school lacked working capital, it failed to become accredited by the state, and it had super strict rules for the student body (surprise, surprise), which deterred students from attending. There were certain rules that made sense: no gambling, drinking or smoking (they were teenagers, after all); but they were also prohibited from watching movies and dancing. We saw how the ban on dancing went in Footloose – it doesn’t work. Yet somehow the Mountain State Baptist School operated until the 1980s…and judging by internet comments, it also harbored many fond memories. Who knew? I guess I’m just prejudice against anti-dance establishments. 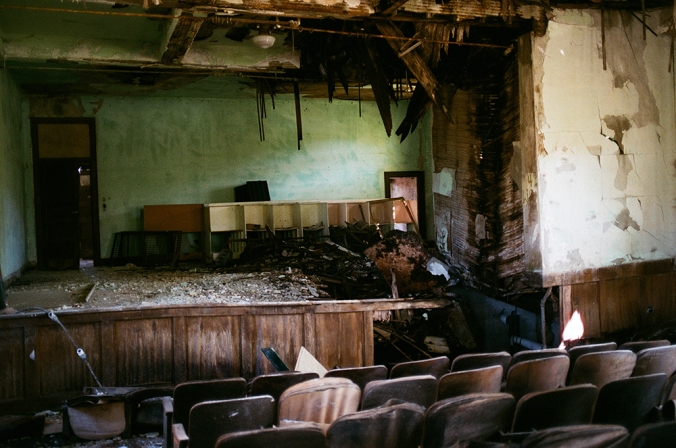 No dancing to be had on this stage!

After that, the building was used as rental apartments into the mid-1990s. After touring the facilities, I’m not entirely sure how that worked, but I’ll take their word for it.

No scandals. No murders. Just a bunch of movie-hating religious zealots. I guess not everything I visit can be filled with mystery and intrigue!

Although, I’d consider it a mystery how this chair is still balanced on these stairs, which I might add, lead to a large deep hole.

Although, not every place I visit has adorable “guard dogs” that wait patiently outside for me until I return for more belly rubs, either. 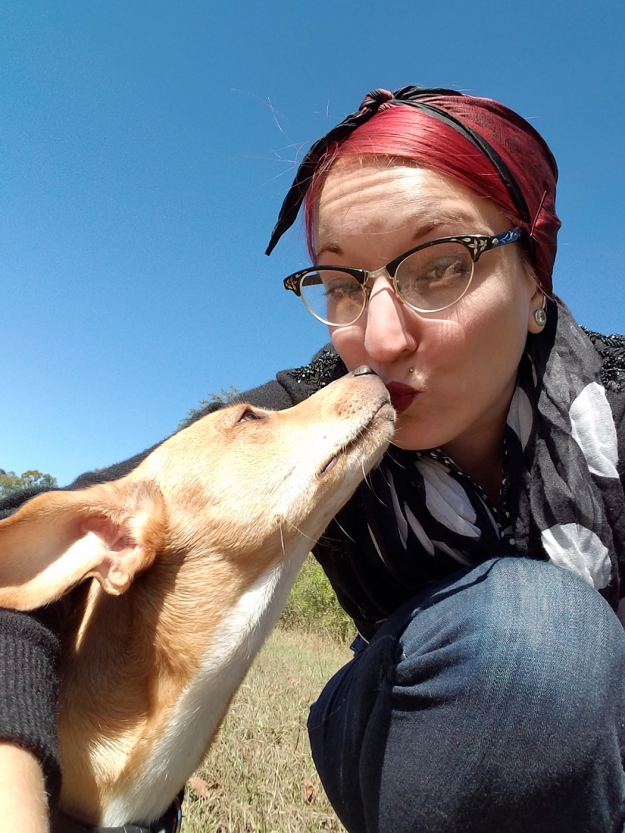 I can’t even tell you how I stumbled upon this school, but I did somehow. There’s not a lot of detail on its location – it’s more of a “if  you live here you know it” type thing. And it took a bit of internet sleuthing to find it, so if you ask me where it is, I ain’t telling. Do your own research, kids! 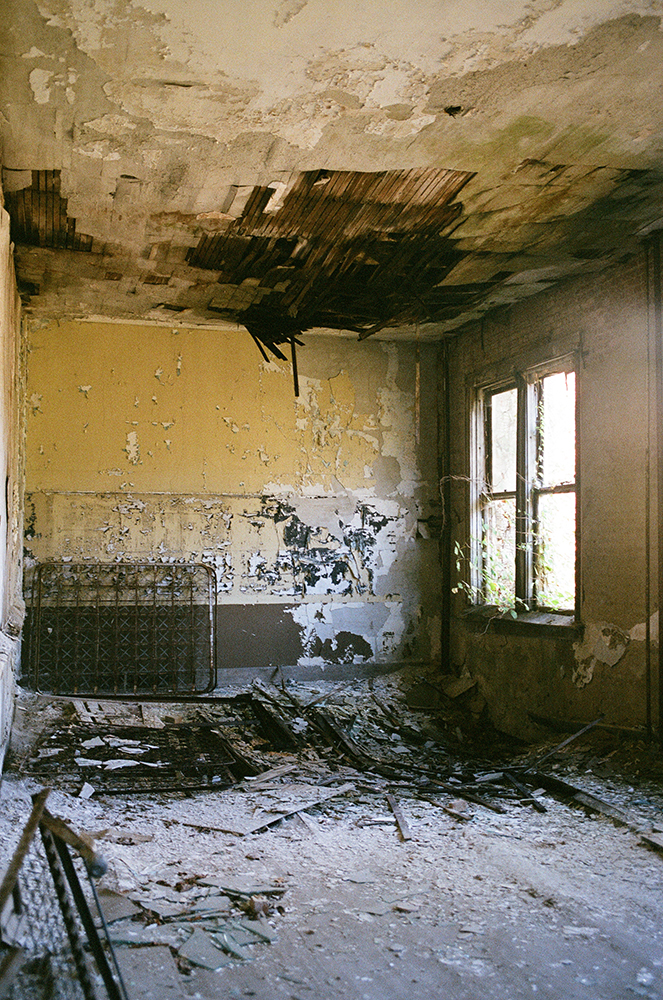 And watch your step.

The structure of the school itself has seen better days. Floors are collapsing in on themselves, leaving many areas of the building completely inaccessible. If you try to climb the beautiful staircase that greets you at the main entrance, you’ll see the top of the stairs  leads to a fall to your death (or at least broken legs). Like any of these places, be mindful of where you’re walking!

The thing that was probably the most unsettling about the property was the almost complete lack of graffiti. Aside from a couple of small tags, it was clean. Every place I’ve ever visited usually had a barrage of teenage angst in the form of unoriginal spray paint quotes or rudimentary penis art adorning the walls. But for some reason, this place has been off the teenage delinquents radar – hopefully it stays that way!

From what I can find, there are no future plans for the Academy. The only thing I could find was a Youtube video from a realtor 5 years ago trying to sell the building for $159,900. There has been some chattering that it sold this past summer, but when I was there in October, if someone does indeed own it, they certainly haven’t done anything to it. 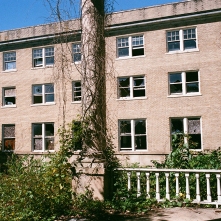 Slightly disappointed in myself that I failed to actually photograph the grand staircase with nothing aside my cellphone. 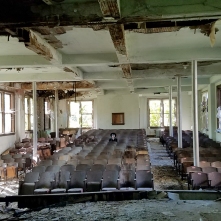 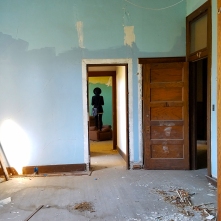 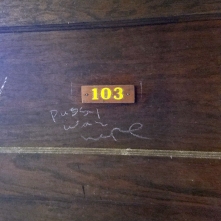 We did find SOME graffiti – still just as uninspired as ever. 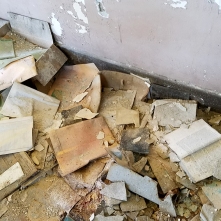 This was as far as we made it on the 3rd floor. I respect my health and safety too much to tread those precarious waters. 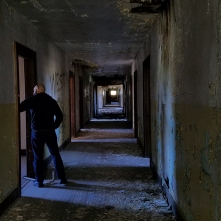 Seriously – look at how handsome this little guy is.
Advertisement