A lot of people have asked me where I discover these abandoned places that I visit. Sometimes I just stumble upon them. Sometimes it’s from internet research. But back when I was dating, I received a lot of recommendations from online dating. I had a little mention in my profile about how I liked visiting abandoned places, and all of these men came out of the woodwork asking me if I knew about such-and-such place. Their attempts at breaking the ice were almost always ignored (sorry fellas), but I wrote down all of these places, and called up someone else to see if they wanted to visit this new place I just heard about. Letchworth Village was one of those places. Thanks OkCupid – at least you were good for something.

Letchworth Village, officially known as Letchworth Village Home for the Feeble Minded and Epileptics, opened its doors in Thiells, NY in 1911 with a 130 buildings located atop a sprawling 2,362 acre lawn. It was named after William Pryor Letchworth, a noted humanitarian and philanthropist, who was familiar with institutional conditions. The hospitals original intentions were noble, aiming to provide the utmost quality in care for the patients.

Some of the rules outlined by Letchworth were:

These rules were similar to the fundamentals of the Kirkbride buildings (see Hudson River State Hospital), and Kirkbride’s son, Franklin Kirkbride, was actually heavily involved in the building of this facility, making sure that it would be conducive to comfort and rehabilitation. However, within the first 10 years of operation this dream was shattered, as the facility was already experiencing a problem with overcrowding. In 1921, the poplation at Letchworth was about 1200. By the 1950s over 4,000 people were crammed into the already tiny resident dormitories. Despite the booming population, the state refused to build any additional facilities. 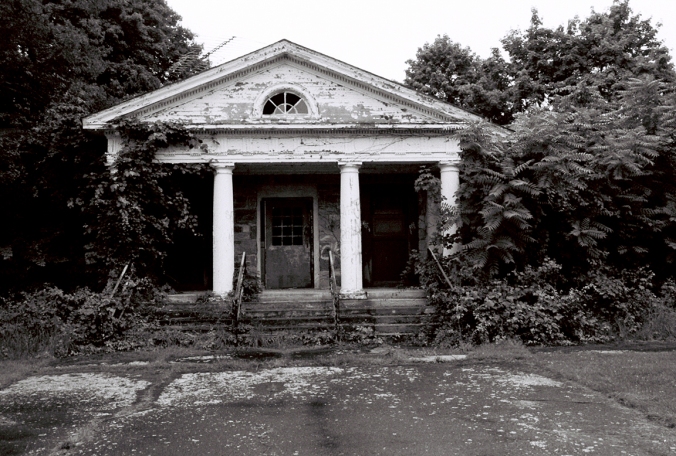 What was probably most disturbing about the facility, was that the majority of the residents were children, ages ranging from 5 to 16 years old, that were abandoned there by their parents. This facility operated during an age where things like epilepsy, bipolar disorder, or other afflictions were still confusing and relatively unknown to society – so when a parent had a child with one of these ailments, they did not know what to do with them, as they were seen as lost causes, and dumped them at a facility to be forgotten. As a result of their abandonment, they were then “owned” by the state, and thus subjected to deplorable conditions. 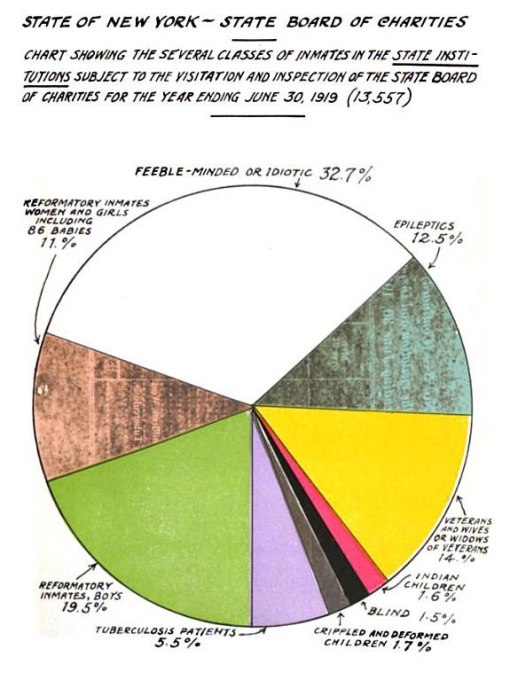 Chart showing the several classes of inmates in the New York state institutions, 1919.

A former worker named Dr. Little, presented in an annual report in 1921 detailing the three categories of “feeble-mindedness”: the “moron” group, the “imbecile” group, and the “idiot” group. The last of these categories is the one that could not be trained, so Little advised that they should not be taken into Letchworth Village, because they were unable to “benefit the state.” Children who belonged to the first two groups were forced to work in the fields, load thousands of tons of coal into storage facilities, build roads, and farm acres of land, amongst other projects.Visitors to the facility often observed that the children were malnourished and looked sick. The Letchworth staff claimed in an annual report that there was a scarcity of food, water, and other necessary supplies, but this was all untrue – they were all emaciated due to the cruel neglect. In the 1940s, photographer Irving Haberman released photos of the facility, showing patients unclothed, unwashed, and locked in empty rooms.

With no parents to advocate for them, the children were often subjected to medical tests, the most famous one being Hillary Koprowski’s testing of the polio vaccine on 20 patients. Because the tests were deemed successful, there was no public outcry.

The conditions began to deteriorate so horrendously, that even staff members began to turn on each other, with many assaults and rapes reported amongst co-workers.

Throughout the mid-1900s, Letchworth saw hundreds of patients die. Some of the patients had their brains extracted from their skulls and kept on display in the laboratory. Their bodies were then buried in a plot of land a mile from the facility, nameless, with only their patient number on a T-shaped marker, which in some cases was to hide the name for the ashamed families. While a plaque was erected in 2007 finally paying homage to these anonymous bodies, several of these name-less graves are still unidentified. 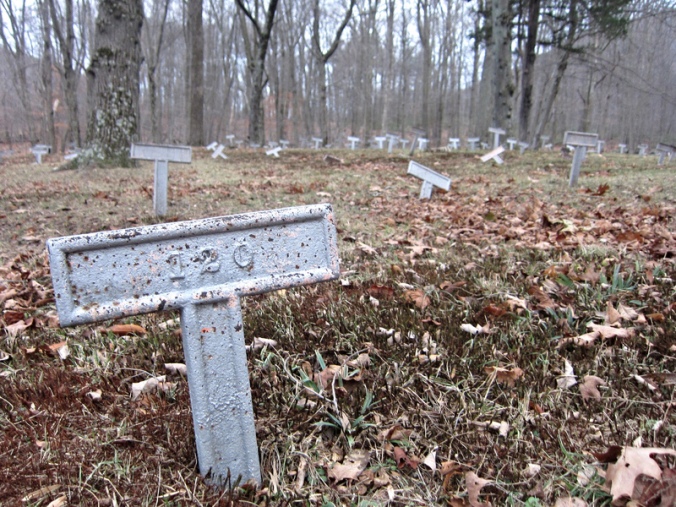 Despite the deplorable conditions, the facility remained open until 1996. It blows my mind that this place was able to operate for 85 years! In 1972, Geraldo Rivera featured Letchworth in his expose, “Willowbrook: The Last Great Disgrace,” but even though audiences were horrified, it did little for the conditions of the establishment. Letchworth Village was finally closed due to asbestos found in the walls and on surfaces used for experiments. Not because of the deplorable conditions that existed for decades…Way to go, New York.

Patients were moved to more up-to-date facilities in the county. To this day, workers from Letchworth refuse to speak of their experiences.

I’ve been to Letchworth twice now. The first time I visited, I was accompanied by a man I was casually dating. But, like a dumbass, I forgot my camera at home, so I wanted to return again, taking my boyfriend with me on this second trip. I really know how to pick date spots.

The facility itself is now a part of a public park that is freely accessible to the public. It felt strange to see people walking their dogs down paths that were lined with these decrepit structures. The buildings themselves are all boarded and locked up, but thanks to teenage delinquents there was no shortage of entry ways into most of the buildings.

I am not very spiritual, and I don’t really believe in ghosts, but the negative energy I felt from touring this facility during both of my visits was suffocating. It probably helps that a lot of the buildings still have remnants like electroshock therapy machines, patients beds, and cabinets labeled “specimen cups,” amongst other things. The air in a few of these buildings was also heavy, with what I’m assuming was asbestos – one being so bad that I had to exit it within a few minutes of entering. We also found a bunny that had died in one of the buildings. When I returned a year later, the bunny was still there, but this time in pieces, as the rest of him melted into the floor.

In another life, a bunny inhabited that fur explosion.

Depending on which buildings you entered, some were more structurally sound than others. And when I visited this past June, the area was teeming with wildlife, both alive and dead. We saw a few deer (or maybe it was the same deer multiple times) and a hawk eviscerating a rabbit in the middle of a beautiful green field. 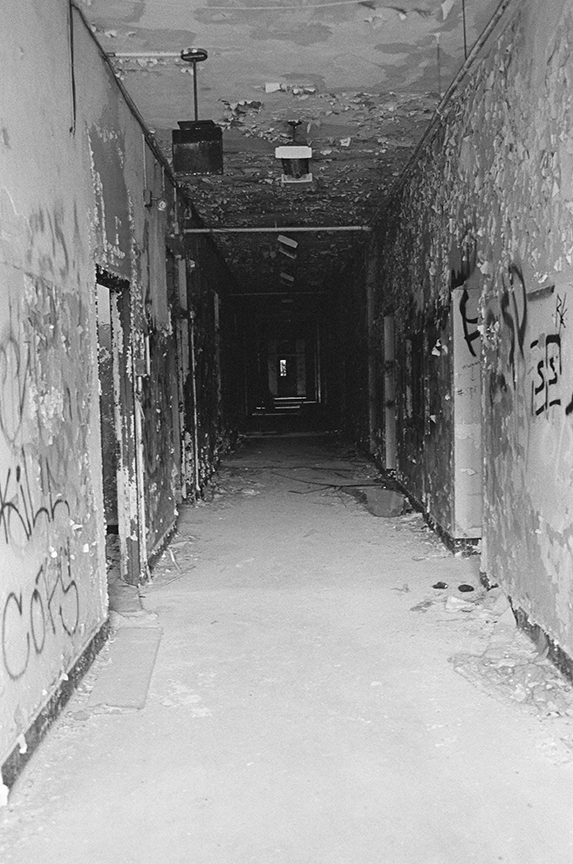 There are talks of redevelopment of the area, but nothing has been solidified yet. A golf course has already been added to the area, as well as the Veterans Memorial Park, which hosts an array of little league fields. Towards the end of 2014, multiple ideas have been proposed from a senior citizens community to college campus, and even a Lego Land Amusement Park. I think if we learned anything from Lake Shawnee, it’s probably not the best idea to build a park on tainted grounds. 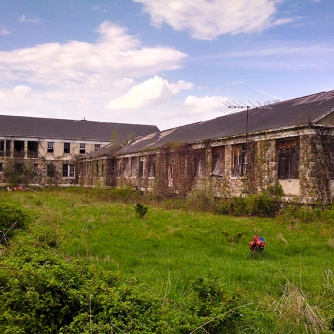 The most interesting thing about visiting Letchworth twice was seeing how everything changed. This was from April 2014.

See the top center windows of the building covered by foliage?

That’s where this was taken. 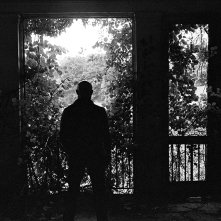 This was the inside view. 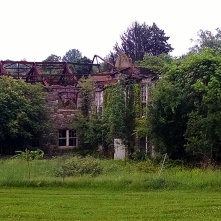 And this is the same building a year later. 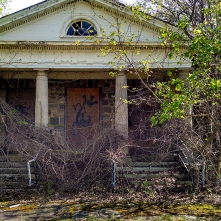 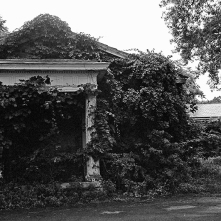 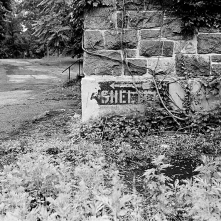 I can’t imagine there was much shelter from anything on these grounds. 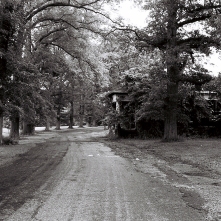 These terrible pictures were everywhere – like some sort of consolation for the dismal conditions. 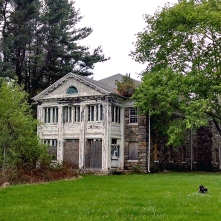 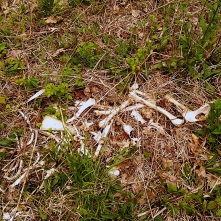 Some (I’m assuming/hoping) animal bones found on the grounds. 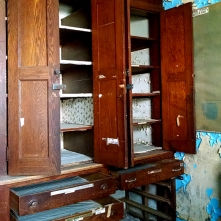 A medical supply cabinets in the girls’ dormatory.

With drawers labeled for specimen cups, amongst other things.

And a medical emergencies bulletin board. 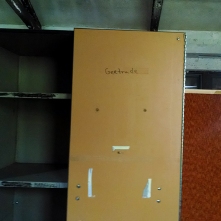 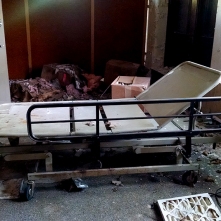 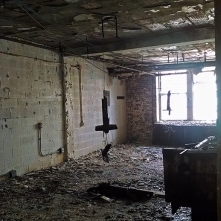 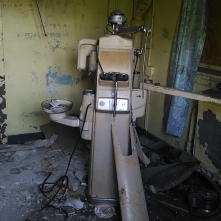 We tried to figure this one out, but our deducing was electorshock therapy machine. 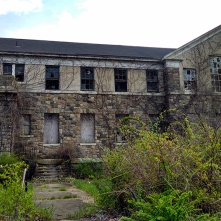 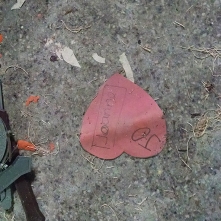 My second visit was on a rainy day, so sunlight in the buildings was scarce.

There was an error retrieving images from Instagram. An attempt will be remade in a few minutes.