Holy Land USA is an 18-acre abandoned Catholic theme park located in Waterbury, Connecticut. How could I pass this one up?

The park is located down a dead end road in a fairly sketchy looking neighborhood. (The grocery store, which we stopped into to grab snacks at the end of the day was something out of Repo Man with only non-brand products). At the end of the road was a large looming entrance gate for the theme park, with several signs notifying that the park was video monitored and trespassers would be prosecuted. My prior research had told me that the signs were only scare tactics and there actually weren’t any cameras. So we parked right in front and started to walk in.

As we started to enter, we saw a man with a clipboard walking down the path in our direction. We started to panic and tried to formulate a back story as to why we were there (“We’re art students” is usually the default excuse). The man ended up being a pastor, living the rectory also at the end of that road, and voluntarily maintained what was left of the property. He ended up being very kind, and told us the entire history of the space. He also told us that he can’t prevent us from going in, but if we did, to please stay on the path, as going off of it could be dangerous as the ground was unstable.

The theme park (not to be confused with an amusement park with rides) was created by John Baptist Greco, a Roman Catholic attorney and founder of Companions of Christ, an organization he created with the purpose of building an attraction that would replicate Bethlehem and Jerusalem. Greco had met Walt Disney at a convention in the early 1950s and together they brainstormed their individual ideas of a theme park, which was an innovative idea at the time (I think Disney might have won the idea game).  In 1955 construction began on the space. Greco had his team visit sites in Jerusalem and Bethlehem in order to create exact replicas of the buildings and towns (I believe the pastor told us that all of the replicas were 1/16th of the actual buildings…don’t quote me on that, though!)

During its peak years of the 1960s and 70s, the site was a fairly active tourist destination, attracting around 40,000 visitors annually. We were told that the intent of the park was to educate and teach the history of the Bible – not to impose any sort of belief system on visitors. 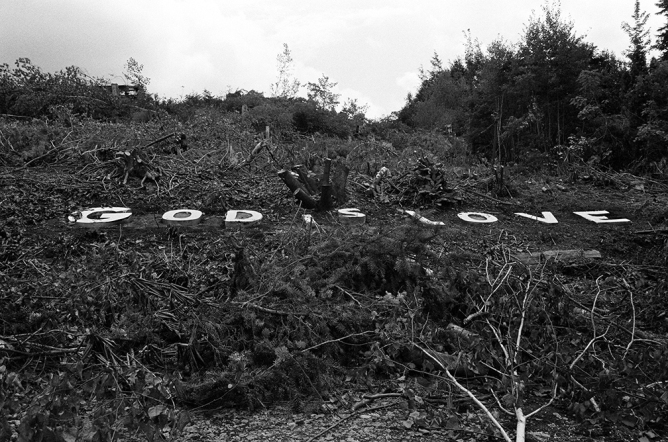 In 1984, Greco closed the park with the intentions of improving and expanding, however that never came into fruition as he died in 1986 at the age of 91. Even though he left the property to a group of religious teachers, the Fillipini Sisters,  the space quickly fell into a severe state of disrepair. I was warned in advance that there is typically a lot of violence seen around this area, including a rape and murder that occurred in 2010, and to not get stuck there at night. So in short, the locals have not been kind to the property.

The site of the park is actually quite beautiful and not as large as it sounds. It’s perched atop a very high hill, giving a stunning panoramic of the town down below (you can’t really tell how derelict the town is when you’re up that high). And a part of the path you follow around the park leads you through a picturesque grove of trees (then again, I live in NYC, so I am impressed easily by trees).The replicas have seen better days, and a lot of the statues have been vandalized, but it appeared that some of the stones engraved with bible passages had received a fresh coat of paint, recently.

It’s a nice view once you look beyond the debris.

There had been several attempts made to restore the park, however they all have failed. We did see small bits of upkeep, like trimmed grass and weeds, and dead trees that were cut down into small pieces. In 1997 a group of Boy Scouts repaired the infamous illuminated “Holy Land USA” sign as part of a community service project. Even more recently, in 2013, Waterbury mayor Neil O’Leary purchased the property and began raising money for Holy Land’s restoration. A part of this restoration was a brand new internally-lit 57 foot cross, which can be seen looming over the town from miles away. This replaced the older 56 foot neon cross (1 foot larger!), which provided fodder for the town joke that citizens grew up thinking Jesus was electrocuted on the cross.

And word on the street is that this fundraising allowed the park to re-open publicly in September 2014 despite on-going renovations. It looks like they also have a shiny new website where they’re selling Holy Land Timex watches to raise money for the re-build. They even held an inaugural mass there on September 14th, 2014. Hooray? (We missed this public opening by two months – thank god). 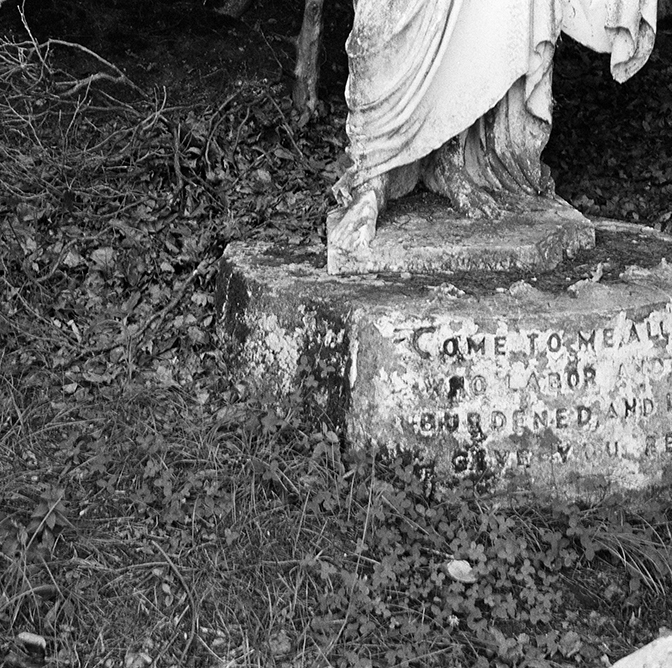 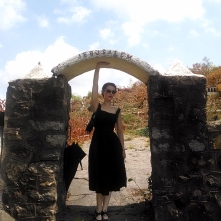 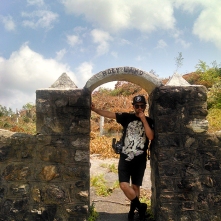 I could not have asked for a more aesthetically pleasing companion on this trip. 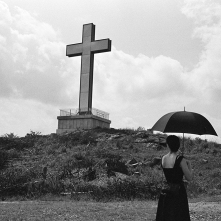 Seriously. I wish I could say this outfit was planned, but it definitely was not.

More than one large cross at the top of the mountain wasn’t enough, apparently.

And this baby Jesus was found at the base of the center wooden cross. I’m not entirely sure if this is a gag, or if it actually was planned to be there.

A part of the gate entering Holy Land. 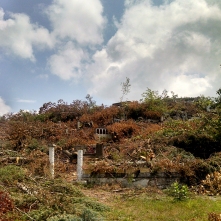 Somewhere in there is a mini Jerusalem. 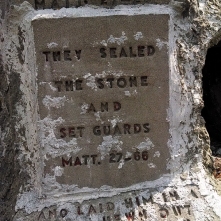 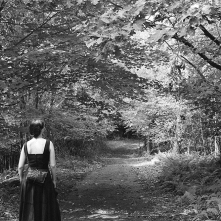 When this was operational, you would walk down this path and loudspeakers would recount tales of the Bible. 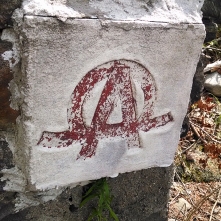 I have no idea what this is, but it was on a few structures. I like to think of it as a hidden superhero symbol. 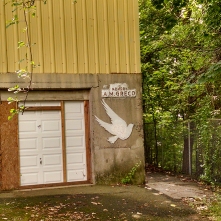 A small memorial at the entrance.

Evidence of repairs still in progress. 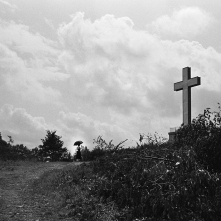 I couldn’t resist getting Darlene in these shots. 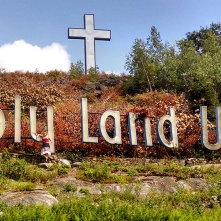 And to show the scale of the sign. That’s a tiny me standing by the ‘Y.’

Looks pretty picturesque when you didn’t get any gigantic crosses or debris in the photo.