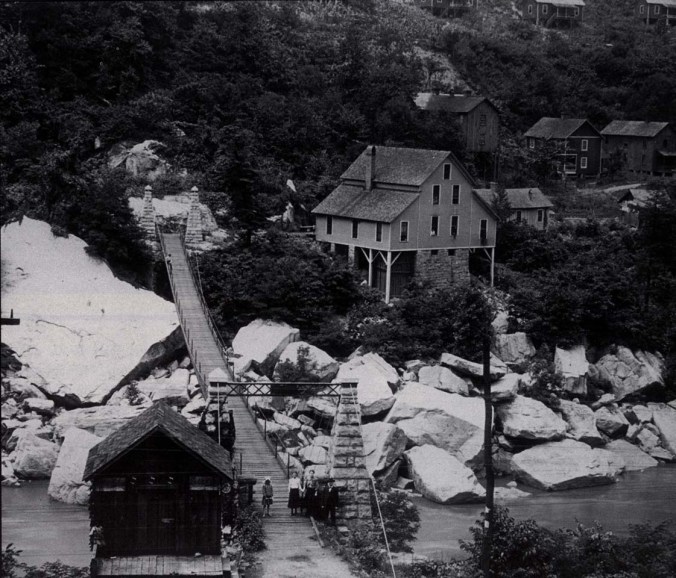 New River Gorge runs through the middle of West Virginia, and during the Industrial Period, more than fifty mining towns sprang up in the wilderness surrounding the river due to coal mining interests. Inhabited by several thousands of people, the area began to flourish after the completion of the Chesapeake & Ohio railroad line, which not only provided faster travel between the Atlantic Coast and the Ohio River Valley, but also led to fast coal transportation through the gorge, thus encouraging the local mines in the New River Coal Field to open shortly after. In 1888, it was estimated that the area was producing 1.5 million tons of coal. However, the gorge’s steep slopes and its narrow width made for a low return on investment, eventually slowing business and, starting in the 1930s, causing closure of many of the mines and forcing people to abandon the towns. 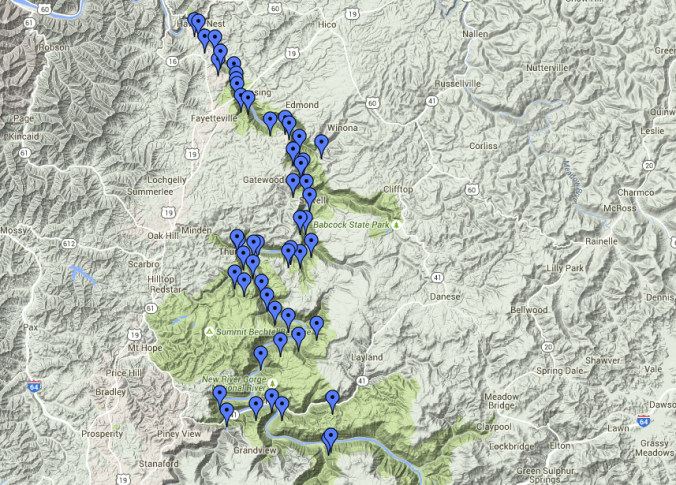 A Google maps view of all of the New River Gorge ghost towns.

Choosing which town to visit was narrowed down by research, but the first town we actually visited was based on which one we were able to stumble upon first. There were a lot of attempts, and an equal amount of give ups, when driving around aimlessly through the area. With these ghost towns, you can get general coordinates of each area, but it was difficult to find exact directions – and these are places you are allowed to visit! I’ve had an easier time finding my way to places where I shouldn’t be. After giving up on trying to find Kaymoor, we somehow managed to navigate our way to Nuttallburg via a long, narrow, winding, mostly-dirt road where cell phone reception went to die. Thankfully there was no one else on that road, because there was certainly no where for another car to go, with the river on one side and a mountain on the other. There was a lot of doubt as we were driving, but with no place to turn around, we were forced to follow the road (for 5 miles!), silently praying that we weren’t severely damaging the underside of our rental car that was not built for this sort of off-roading. With car still intact, the road finally opened up into a small parking lot and an outhouse that was emitting the most rancid smell I’ve experienced since CBGBs. We parked, albeit skeptically since there was not another soul in sight, and began hiking up the overgrown trail before us. Quickly after we began hiking, we noticed another car pull into the lot. Being paranoid New Yorkers, we watched them from a secluded spot of trees from above to see if they were going near our car. After a few moments, the car turned around and never returned. We thought we were out of sight amongst all of the trees, but when we returned to the lot later that day we realized that our perch up above was in fact visible, and the other people probably were wondering what the psychos were doing staring down at them and cut their losses and go-the-fuck-out. Good riddance. 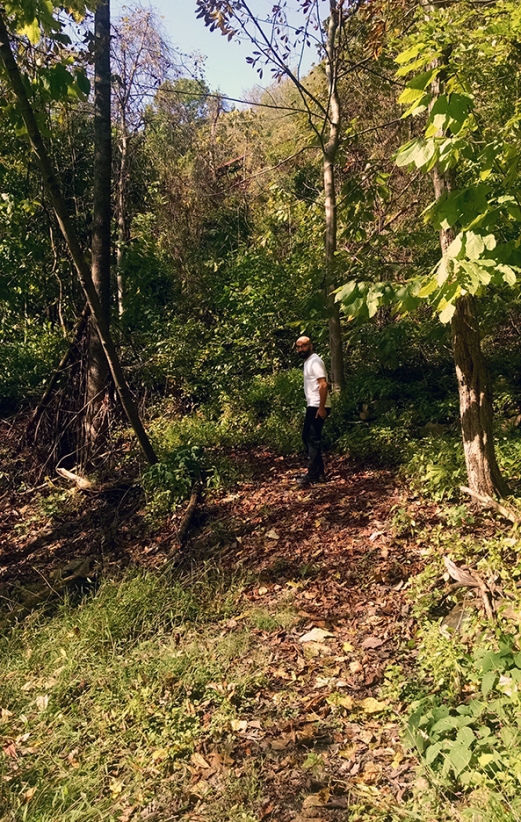 English entrepreneur John Nuttall saw opportunity around New River Gorge, like many others. Having already successfully opened and operated several mines out of Western Pennsylvania, he expanded his mining empire in 1870 by purchasing land along Keeneys Creek and New River in anticipation of the completion the C&O railroad. When the rail was finally completed three years later, his newly founded Nuttallburg quickly grew, becoming the second mining town in the area to ship the “smokeless” coal. 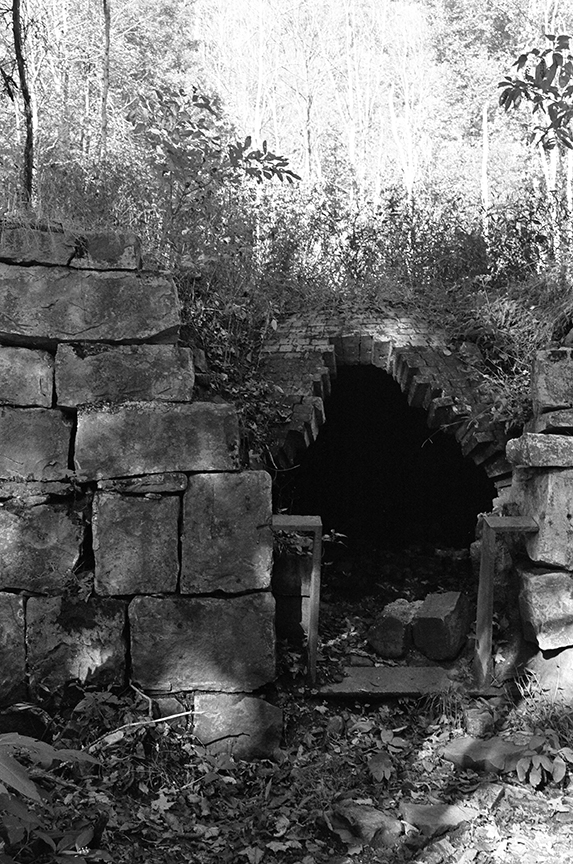 One of the many coke ovens where the coal was baked. These were all retired by Ford in 1919 as a part of his advancements. 40 of the originally 80 ovens still remain today.

Nutall opened up three mines in the area – two of them located in Nuttallburg. Despite his passing in 1897, his heirs were able to continue his venture for several years. In the 1920s, the town became the focus of national attention as automobile mogul, Heny Ford, leased the town’s mines to provide coal for his company steel mills. Even though he made many improvements to the mine and town during the eight year tenure, his larger goal of “vertical integration,” or the control of all aspects of production, failed when it became evident he could neither control, nor afford to buy, the railroad that was responsible for transportation of the coal his mines produced. He sold interests in the Nuttallburg mines in 1928. The mines of Nuttallburg passed through three owners after Henry Ford, with production limited to local use as the market for coal declined. Production finally ceased in 1958 and Nuttallburg’s residents quickly abandoned the town, following suit of many of the towns around them. 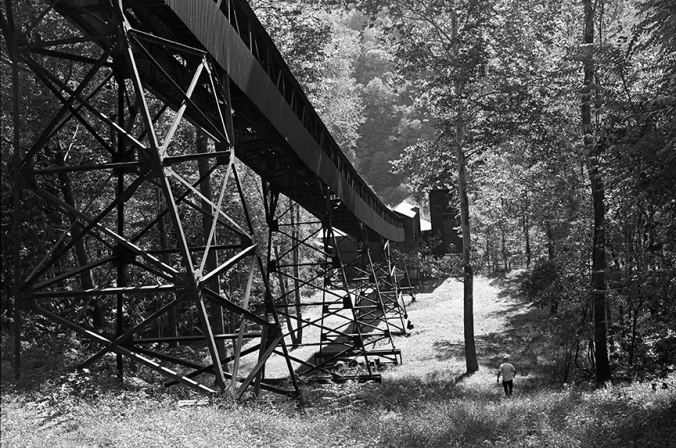 Like many of the towns in the area, Nutallburg now belongs to the National Parks Service (the Nuttall family sold the land to them in 1998) and can be accessed without fear of arrest. There are only a few foundations left of the original 100 homes homes that existed there, however 40 of the original 80 coke ovens still remain as well as the looming tipple (aka the structure used for moving coal to the railway cars for transport) that cuts through the middle of the property, and the abandoned rail road tracks. 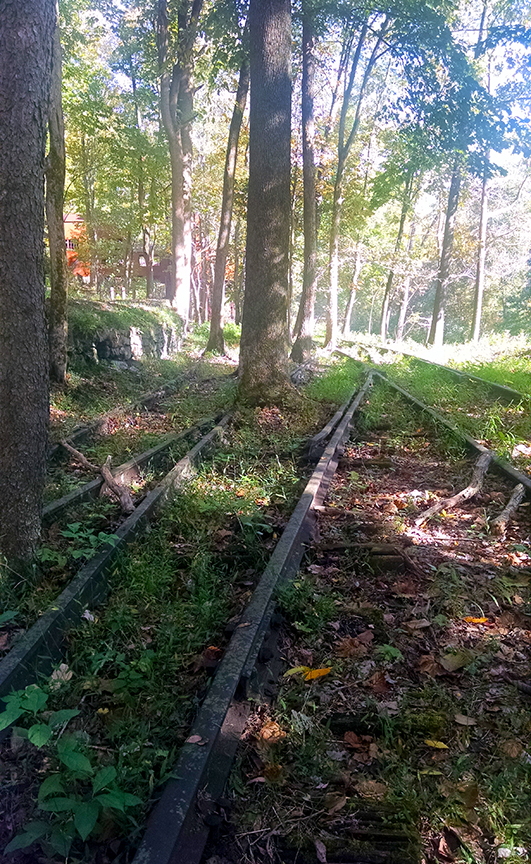 The size of the trees are pretty indicative to how long these tracks have been dormant.

There are a handful of placards scattered around the area giving brief histories of the space, however, it’s not very well marked and was conducive to getting lost (which usually adds to the fun of it). The couple of hours we spent there poking around and climbing the tipple, aside from our parking lot stare down, we never saw another human being (just a large snake). For a few fleeting moments, it really did feel like we were wandering uncharted territory – until we returned to our septic parking lot and were reminded that a least a few people had been there before us.

Continue to Part 2 for our visit to West Virginia’s city of vice: Thurmond. 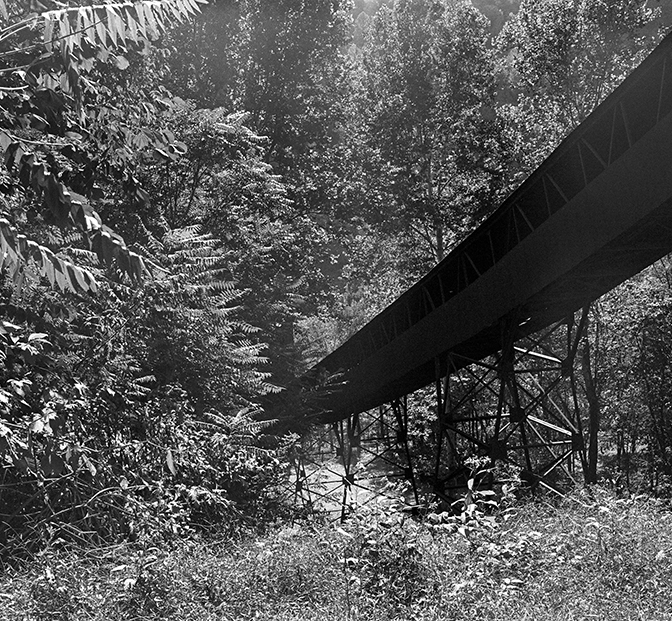 Walking down the hill, following the tipple’s chute. 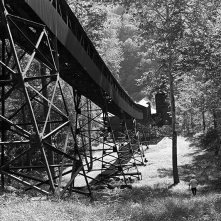 The coal from the mines at the top of the mountain was processed and sent down the chute to the facility at the bottom. 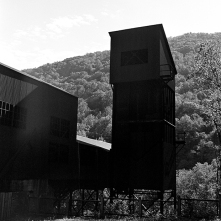 From here, the coal would be dumped to the incoming train cars down below. 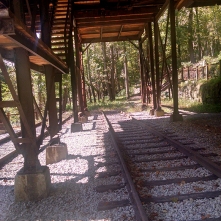 Underneath the tipple where the train cars would get loaded up with coal. 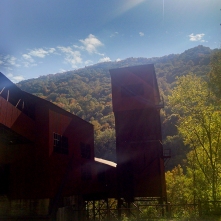 At a certain point, I ran out of film, and like an idiot, I forgot to bring extra rolls with me. The car was way too far away at this point, so I had to resort to using my phone, which had a hard time with the extremely sunny day. Lens flare, ahoy. 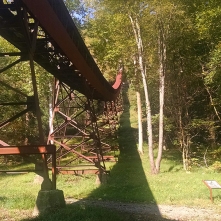 Another view of the tipple – headed up the mountain to the mines. 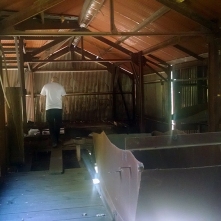 And of course we had to climb inside. Poking around the main structure of the tipple. 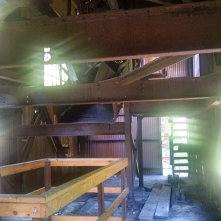 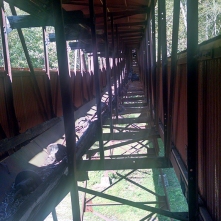 Looking up the tipple’s chute (pardon, me). 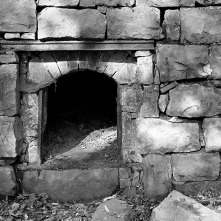 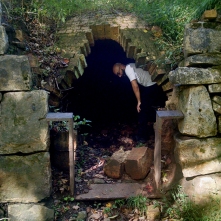 To give you an idea of their size – my trip’s companion poking around inside a coke oven. Nothing of interest inside, unfortunately. 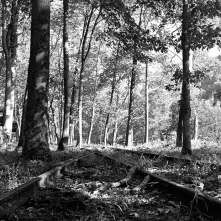 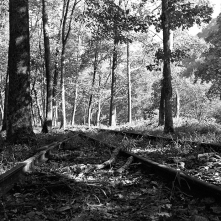 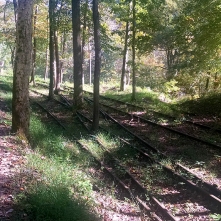 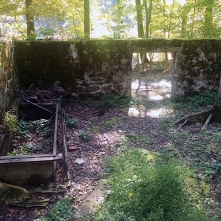 While many of the homes were barely foundation, this jewelry store stood up to the elements a little better. To the left is where the jewelry counter used to be. 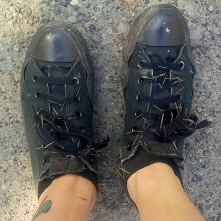 I don’t know what these came from, but my shoes and clothes were covered in these sharp burs that took FOREVER to pick off.