After gallivanting around the country for the last 6 months, I have a gigantic backlog of photos that need some sorting and a blog that needs updating. I recently performed in a burlesque show where the MC mentioned this site and my adventures during my intro. If that’s not a kick in the pants to update this thing, then I don’t know what is.

A couple of weekends ago I took another road trip down south to see what abandoned treasures awaited me. Two years ago I visited Thurmond, WV, which is one of the many New River Gorge ghost towns that surround the area. After researching the town and reading up on the history, I found out about the hilarious rivalry between Captain William Thurmond and Thomas Mckell, the founder of Glen Jean and the infamous Dun Glen Hotel. Even though Glen Jean is not really a ghost town, I really wanted to re-visit the town to see what this infamous den of vice had left. (If you missed it the first time around, you can read the Thurmond vs. Glen Jean rivalry here).

After breakfast at the Omlette Shoppe where we watched someone on meth meticulously mix the contents 25 packets of grape jelly into her grits, and a failed trip to a rainy Stotesbury (poor decision to wear canvas sneakers today), we decided to go to the tried and true town of Glen Jean. We had recalled seeing some abandoned buildings in the vicinity on our trip to Thurmond (not realizing we were in Glen Jean at the time), and figured it was a pretty safe bet to find something.

And we were right!

A stop was immediately made when we happened up an abandoned school house along our route, which turned out to be the Glen Jean School.

It’s unclear whether this used to be an elementary school, a high school or both, as the history is a little foggy.  Some of the remnants that are left on the wall suggest that its last incarnation may have been (at least partially) an elementary school. There are even some reports that it was used as a hospital at one point.

What I do know though, is that when McKell was through pillaging the lands from Thurmond, he needed to start building a community for his workers toiling in the coal mines, which included a school house for the families. The first school house burnt down in 1924 (which I can only imagine was Thurmond’s fault – they seemed to like setting each other’s property on fire). The building that stands today came shortly after, built in 1925, with the 2nd floor added in 1926. 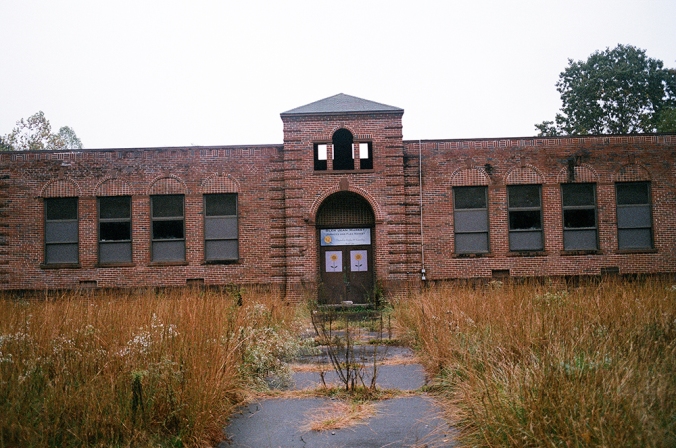 The Glen Jean School, as it stands today.

The school remained in continuous operation until 1997. The building was purchased in 1999 to serve as business offices and visitor center for the Thurmond, Glen Jean, and Great New River Railroad, but was closed in 2006 when the railroad was sold.

There are also many accounts of the property being haunted, which some claim are from its past history of being a hospital, and others claim from a brutal murder – which I tried to research, but the only information I found came from a paranormal investigator who learned about the murder via speaking to spirits… The spirits told him it was a choking, in case you were wondering.

When we were walking around, the only thing I noticed was the squish of my sopping wet sneakers and the creaking of the unstable floors (watch your step!).

This structure, along with the McKell Bank, which sits just down the road, is one of the few remaining structures left from the early days of the New River mining. Architecturally, the bank is quite beautiful – it’s sealed up tight though, so I couldn’t tell you what it’s like on the inside. The school, however, is quite plain in that regard, and aside from an amazing looking old safe and some fraternity graffitti dated 1966, it doesn’t do a whole lot for the old-timey nerd in me. 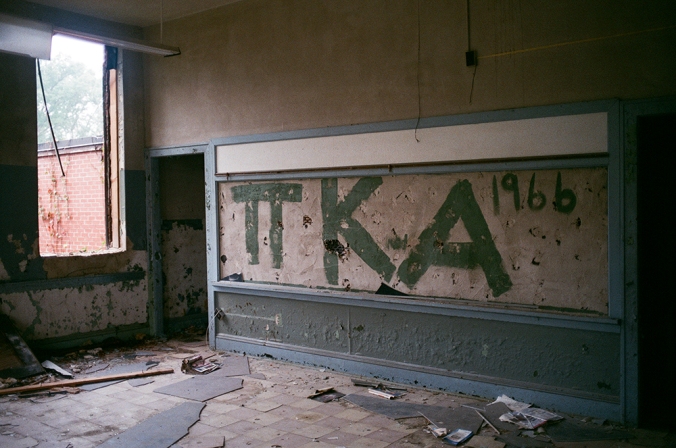 It was a fun spot to poke around, though, with lots of remnants to be found. There are also a lot of holes in between the rooms, which made for more than one Koolaid Man moment. I just wish I knew a little bit more about the space! There was a modern flea  market sign in the front door without a date, but it’s been a LONG time since this place has hosted one. My internet sleuthing left me with many unanswered questions. Anyone out there in Internetland have any insight? 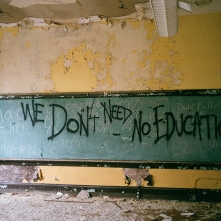 At least the teenage delinquints are up on their musical references. 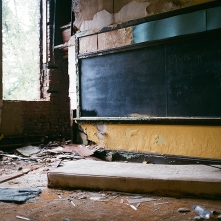 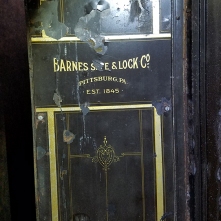 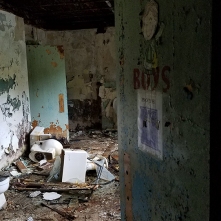 I always wondered what it was like in the boys’ room. 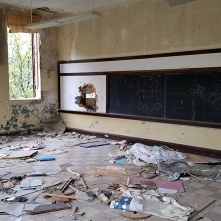 I’d be remiss not to include at least one Kool-aid Man moment. Thanks Candice!