When one thinks of Cape Cod, beaches, sail boats and quaint cottages usually come to mind…unless you grew up there like me, then you think of catnip smoking, Robitussin-chugging derelicts who steal used cars as a method to curb boredom. In either case, Cold War spy barracks usually doesn’t come to mind. 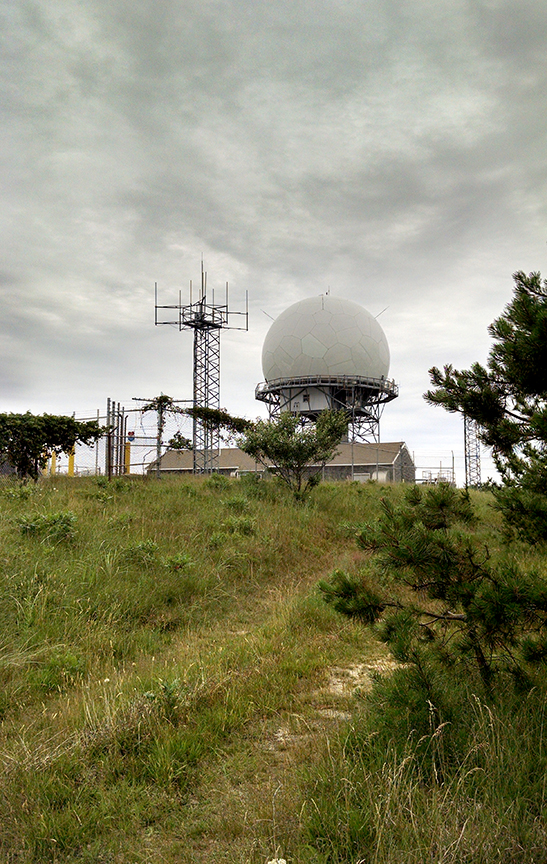 Radar station (aka spy tower) still in use by the FAA today. Wave to Big Brother everyone!

The North Truro Air Force Station was one of the first of twenty-four stations of the Air Defense Command radar network – which was a network essentially created to spy on the Soviet Union immediately after they tested their first atomic bomb. In 1948, the Air Force began construction on these sites around the periphery of the United States, with North Truro AFS being completed in 1951.

From 1951 to 1985, the mission of North Truro AFS was to “Detect, Identify, Intercept and Destroy” hostile air crafts that might enter US territory. Anyone who can remember “duck and cover” drills at school, might remember the innate fear most of the country had towards the Soviet Union and their potential to bomb us with one of their shiny new atomic toys. The station had radars positioned to scan the air space around Cape Cod and to detect Soviet bombers moving across the Arctic Circle.

In December 1955, the station became the support base for the Georges Shoal Tower Annex, located 110 miles off the coast of Cape Cod. The tower was the
first of three towers built off the Atlantic seaboard and equipped with long range search radars. These towers were nicknamed “Texas Towers” for their similarities to offshore oil rigs in the Gulf of Mexico. The towers provided coverage 300 to 500 miles seaward. This extra coverage gave the Air Force at least thirty more minutes of warning and preparation time in the event of an incoming bomber attack.

Texas Tower #4 before its demise. (Image courtesy of C&GS Collection)

During their 30 day rotations on board the tower, airmen and officers would pass the time by reading “Tower Topics,” the Tower’s newsletter, enjoy Sunday newspapers dropped from low flying Navy blimps and barter the tower’s ice cream for fresh lobster brought by passing fishing boats. As luxurious as this life sounds, the men on board were also subjected to constant vibrations and the sounds of radios, grinding gears, fog horns and ping pong balls echoing through the steel corridors (because you have to occupy yourself somehow). Texas Tower 4, was also affectionately called “Old Shaky” because of how easily it swayed in the wind (and frequently making its residents sea sick as a result). In addition to these annoyances, the towers proved to be dangerous and difficult to operate – 32 men died on these platforms during this period.
In 1960, Hurricane Donna passed over Old Shaky causing severe damage. Because of America’s obsessive paranoia toward the Soviets, they couldn’t just abandon the damaged tower for the fear that the Soviets might take it over – so instead they kept a small crew on board to dismantle it. In the middle of dismantling, another storm hit in the winter of 1961, which finally sank the tower, killing the entire 28-person crew, consisting of both airmen and civilian contractors. (Just a note: the crew had ample warning to evacuate, but their superiors told them to remain on board. Soviet fear won over human safety. Good job, guys.) After this tragedy, the decision was made to shut down the other towers, but Tower 2 also saw the same fate as TT-4 during the dismantling; but a storm couldn’t be blamed for the sinking this time around – just idiocy. Lesson learned: Tower 3 was filled with foam and floated back to shore and THEN dismantled. (Tower #1 was never completed for those counting). I get it – mistakes are made, but what a waste of time, money and lives.

As the Cold War began to peter our in the early 1980s, the need for the North Truro station waned, as well. The Air Force deactivated the station in 1985, with a portion of land transferred to the Federal Aviation Administration, which still operates a long range search radar, primarily used for tracking international flights flying into Boston’s Logan Airport and New York’s Kennedy Airport. The Air Force also continues to use the radar to identify and track civilian and military aircrafts. 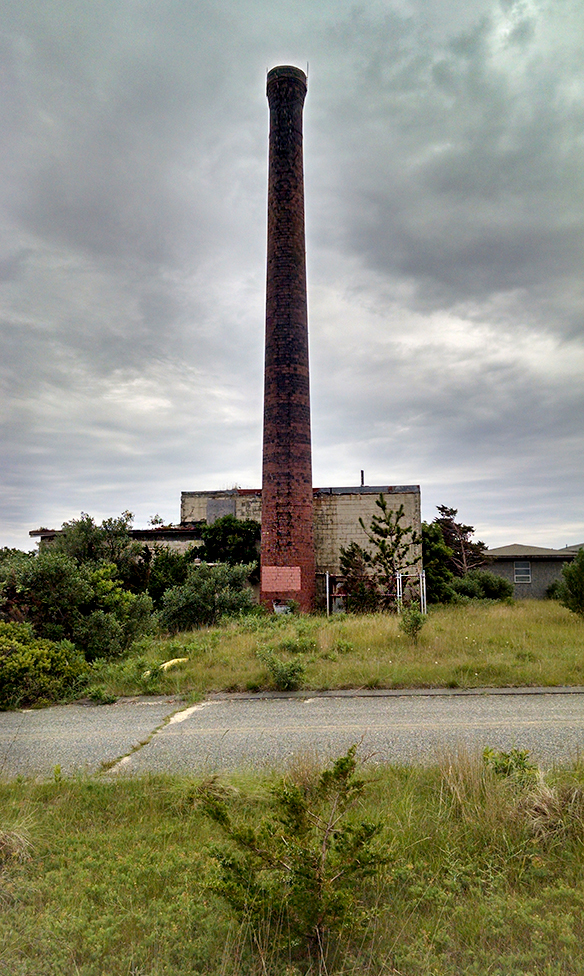 The remainder of the property was  sold to the National Park Service in 1994, and to this day, most of the station operates as public park. The Highlands Center currently operates presenting art shows, educational programs and facilitating scientific research, with further plans to develop more of the 110 acre property.

A few of the buildings, like the library and a school house have been renovated to house some of these programs, however, most of the station still stands as a collection of dilapidated barracks, technical buildings and abandoned military housing. The concrete pads that serve as bases for the radar dishes are still in the ground but the radar dishes themselves have been disassembled.

While the park itself is open to the public, most of the un-renovated buildings are boarded up and off limits. The abandoned barracks and technical buildings were in the middle of the arts center, making it tricky for stealth entry, as there were a handful of people about. We were able to get into a few of the technical buildings, but aside from a few water bubblers (I’m in Massachusetts, I’m excused for calling them that), and signage, the buildings were pretty cleaned out. The houses, however, are further away, totally on their own, and a literal ghost town, overgrown with towering plant life. The houses have been mostly untouched since they were built in the ’50s, which includes the hazardous asbestos and mold that lingers in all of them – and like the other buildings, this is pretty much the only thing to be found inside. After reading one article, they are listed as “too hazardous to enter.” When I have lung troubles in the future, you can wag this post in front of my face to remind me why.

Walking down the cracked streets, it’s hard not to picture yourself in an episode of the Walking Dead. The entire park has some semblance of upkeep except for this area…again, I’m reminded, probably because of health reasons. According to the Cape Cod Times, this “neighborhood” is going to be razed in the near future, probably sometime in 2016, so time is running out to check out these time capsules. Just make sure you bring a respirator!

Special thanks to Lomography for supplying me with some of their amazing color film and a Sprocket Rocket (which enabled me to take those neat panoramic shots – which you will continue to see sprinkled in). 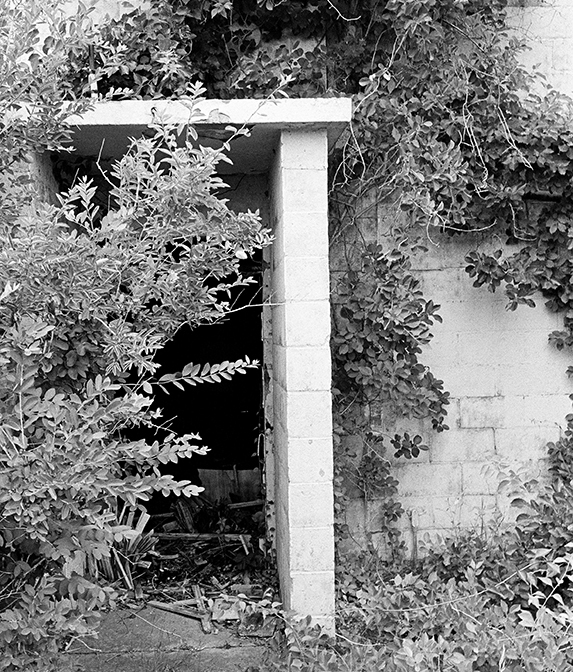 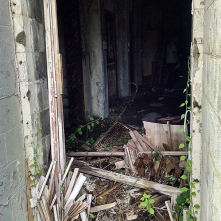 This handy guide lets you know which items you may have been attacked by during your visit. 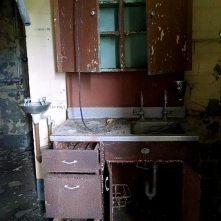 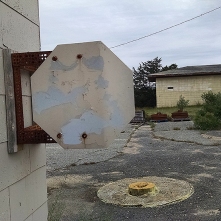 Stop signed bleached from the sun or NUCLEAR WAR? (Definitely, the sun).

Inside what appeared to be officer’s quarters.

Welp, I can’t say I didn’t have ample warning. 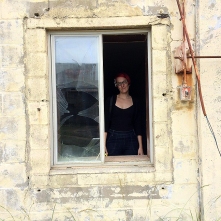 You coming in or WHAT?

Can’t resist a dimly lit staircase. Unfortunately, it led to nothing exciting. 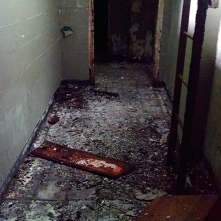 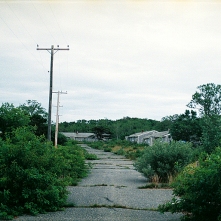 After walking around the municipal buildings around the newly formed arts center, you then travel further down the road and find this.

The amazingly overgrown neighborhood. Hiding in there somewhere is a house. 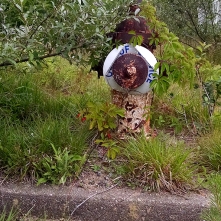 There were several of these hydrants that read “Out of Service” 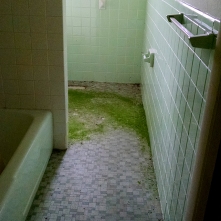 Or mold. This was our cue to leave. 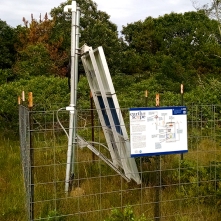 Hidden behind one of the houses was this earthquake recording system.